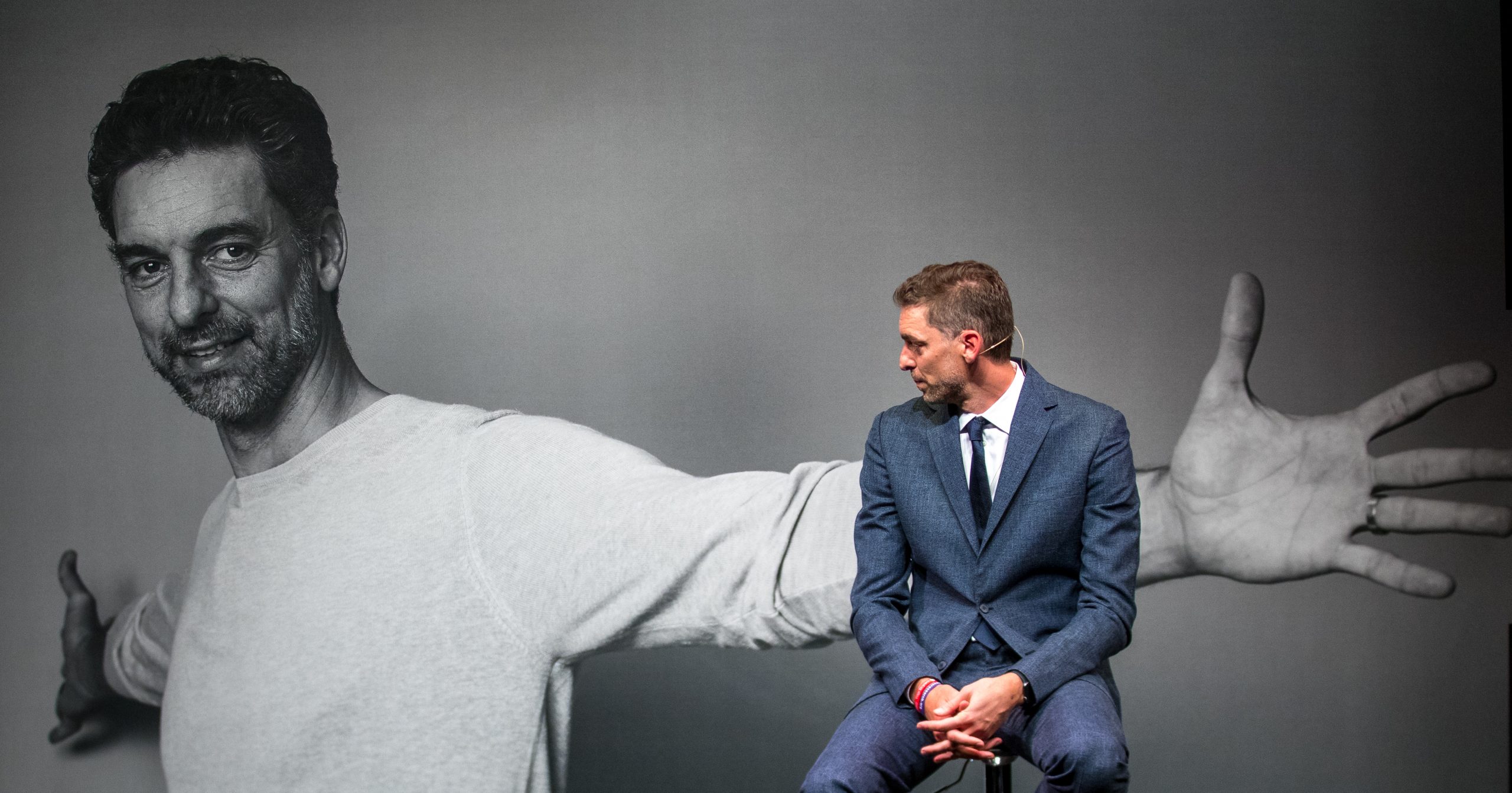 Pau Gasol Retires From Professional Basketball and Reveals His Next Projects

Barcelona, October 5, 2021. “It’s a thoughtful decision. You have to know when to change gear. I wanted to end up playing and enjoying myself, not being forced to quit because of an injury, not on crutches. Thanks to all of you who have contributed to making playing one more year with FC Barcelona and playing in my fifth Olympic Games a reality”. With these words, Pau Gasol has announced his retirement from professional basketball. From now on, he will focus his efforts on defending athletes’ rights, carrying out philanthropic projects, and investing in companies related to sports (both professional and amateur) and wellness.

The press conference took place at the Gran Teatre del Liceu in Barcelona. It was attended by members of his family (including his brother Marc Gasol), friends, and prominent personalities from the world of sports such as Joan Laporta, Jorge Garbajosa, Juan Carlos Navarro, Felipe Reyes, Rudy Fernández, and Raül López.

Pau Gasol began the press conference by recalling the road he has traveled since he was diagnosed in May 2019 with a stress fracture in the scaphoid of his left foot. “Many people thought I shouldn’t play anymore, but I felt like fighting for the improbable,” he said. After a lot of hard work and sacrifice and the help of a great team of professionals, he managed to join FC Barcelona in March 2021, win a league title, and play in his fifth Olympic Games.

After announcing that the reason for his press conference was his definitive retirement from the courts, he thanked all the people who have accompanied him throughout his life. “When I was young, I was told, ‘the most important thing is not to get there, it’s to stay there,’  but I have never tried to maintain myself. I have tried to be better, setting no limits and not letting anyone put them on me. Many people have influenced my life.”

He began by thanking the media, which accompanied him during this whole journey. “I want to thank you for the support and affection you have shown me as a player and as a person, and I hope that this relationship will continue from now on.” He also dedicated a few words to the fans, who have given him “an overwhelming energy, always.”

He then shared several memories of the people linked to his beginnings as a basketball player and the coaches he has met throughout his career “who have taught me the importance of reading, learning and taking an interest in other things.”

He then thanked his teammates from the different teams he has played for, some of whom were present. He made special mention of his brother Marc. “When we played basketball as kids in the backyard of our grandparents’ house, it always motivated me to see how you competed, how you wanted to beat me.  Thank you so much for being so dedicated.”

He also had words for the Gasol Foundation and its tireless work to reduce childhood obesity rates. During his words for La Familia, as the Golden Generation of the Spanish national basketball team is known, he made a special mention to Juan Carlos Navarro, who had taught him “the meaning of friendship,” and to the Basketball Federation for the work done during all these years.

A round of applause followed his special mention of Kobe Bryant: “I would have liked him to be here… But it was not to be.”

Visibly moved, he thanked his parents and siblings for always supporting him and ended with a few words for his wife and daughter Ellie.

AND NOW, WHAT’S NEXT?

In the second part of his speech, he talked about his future. “I have been preparing for this moment for years, although you can never be prepared enough for it. I have invested in a professional team that has helped me to position myself, create paths, projects… I want to thank them because I feel very proud”.

From now on, his activity will be focused on these off-track activities. The main one is supporting athletes through organizations he is a member of, such as the IOC Athletes’ Commission or the Spanish Sports Advisory Council (CADE) of the Spanish Sports Association (ADESP), and sports-related projects such as the Pau Gasol Academy by Santander. In the past, he was also vice-president of the NBPA (National Basketball Players Association).

Secondly, Pau has stated that he will now have more time to devote to his philanthropic work. Specifically, to the projects to promote healthy habits of the Gasol Foundation, an entity that he created in 2013 together with his brother Marc and that aims to prevent childhood obesity. In addition, since 2013, he has been a UNICEF ambassador, and since 2019 Gasol has been UNICEF’s Global Champion for Nutrition and Zero Childhood Obesity. He has mentioned his desire to contribute to the evolution of the Spanish National Plan against Childhood Obesity.

Finally, Gasol has expressed his interest in continuing to develop his facet as an investor in companies related to sport, health, and wellness. “I want to invest in sport, in health, in the evolution of things.” He referred to companies such as Therabody, Overtime, or Better Up.

“Beyond the titles, the medals that I have been able to be part of winning, what is really important is the day to day, enjoying the moment and enjoying it with the people we love. That’s what I’m going to try to do from now on,” he said. And he finished: “This is not a goodbye, we are just moving on. We have a future ahead of us.  It is my dream, and this is what I am going to work on.”

During the event, journalists were encouraged to use the hashtags #GraciasPau, #GraciesPau, or #ThankyouPau on their social networks to group messages of support for Pau after his retirement.

After the question and answer session, the event closed with the song Misteriosamente hoy by Pau Donés.

In 2001, Pau Gasol became the second Spanish player to join the NBA; in 2002, the first non-American to be named “Rookie of the Year,” and in 2006, the first to be selected to play in an All-Star Game. He was also the first Spaniard to win the NBA twice with the Los Angeles Lakers. In 2021 he returned to Spain to play in the ACB league in the ranks of FC Barcelona, the basket club where he started and with which he has won three Spanish Championships: 1999, 2001, y 2021.

He is also a symbol of the Spanish national basketball team and leader of its Golden Generation. He has won two Olympic silver medals, a bronze medal, a basketball World Cup and three Eurobasket (in 2017, he became the top scorer in the history of this competition). That same year he was named Vice President of the National Basketball Players Association, of which he was a member until 2019.

In 2021 he disputed his fifth Olympic Games, where he was elected member of the Athletes’ Commission of the International Olympic Committee. He also defends athletes’ rights as a member of CADE (Spanish Sports Advisory Council), a body part of the Spanish Sports Association.

In 2013 he created the Gasol Foundation, together with his brother Marc, which operates in Spain and the USA, and promotes healthy habits to end childhood obesity. For their work, they received the NAOS Strategy Award from the Spanish Agency for Food Safety and Nutrition in 2019. That same year he was named Global Champion for Nutrition and Zero Childhood Obesity by UNICEF, an entity for which he had already been an ambassador since 2003.